Thanksgiving pre-orders are SOLD OUT. 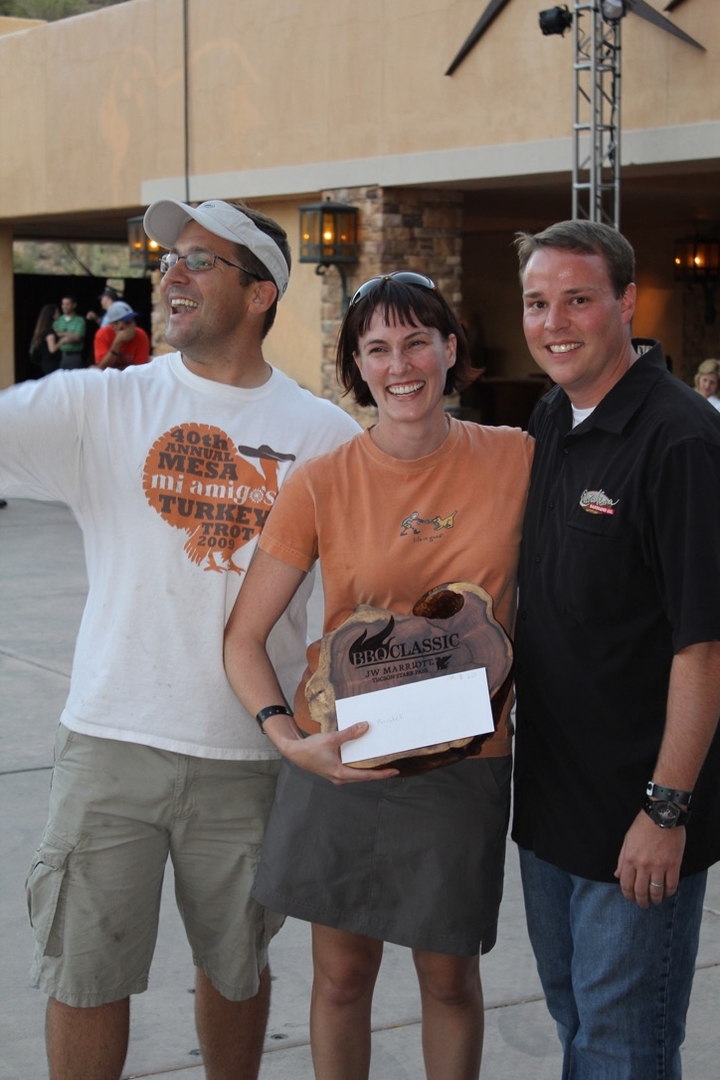 Little Miss BBQ got its start as a competitive barbecue team. Our first contest in Williams AZ was a disaster. Bekke had serious issues with the altitude, we brought 5,000 things we didn't need, my pork butts fell in the coals after the grate of the UDS fell off the bolts and I think I slept for an hour due to the neighbors watching a stupid movie all night right next to me. In the end, we placed in the middle of the pack and we were exhausted but hooked.
We decided to do the next one which was in Queen Creek. Bekke wasn't able to be there so my friend Alain helped out which was greatly appreciated. It was a complete disaster with a massive dust storm wreaking havoc on the event. Nothing really went right but I thought my food was incredible. The judges disagreed. Ah well, Bekke looked at the scores and decided she should get involved with the food.
Our next contest was in Tucson, AZ and it was a serious party event on Halloween weekend. We drank too much, stayed up too late, had a great time, and then we took our first walk for pork (9th place). We were on cloud 9 since our practice was reaping rewards. Quite possibly one of the greatest moments for either one of us was when Little Miss BBQ was called for 1st place brisket! Bam! We ended up with 9th place pork, 1st place brisket, 4th overall and about $1,300! I don't think we slept all night and from that moment we decided that we were going to win GC someday no matter how much practice it took. Bekke kissed her old gymnastic participation trophies goodbye that day and has never looked back. That girl loves trophies.
Bekke's parents live in Austin, TX and I'm always excited to go back. The barbecue is divine and it's places like Franklin BBQ, John Mueller Meat Co, la Barbecue, Smitty's and the Salt Lick that we have drawn inspiration from the past few years. The barbecue and experience are ridiculous and it's captured our imagination and focus for the past few years. Much like competition barbecue we became obsessed trying this, that and everything in between to perfect our recipes. Our original smoker is an R&O Smoker custom made for us by Billy Overton in Granbury, TX. It's a traditional offset with the main chamber measuring 14' x 3' and it's amazing how well it cooks. Our newest smoker is made from a 1000 gallon propane tank. The firebox has about 3.5" of ceramic and mineral wool insulation. It's a beast. Although we are happy with where our barbecue is currently, our quest is still continuing to put out a better product whether it's a new meat producer, a new addition or deletion to the rubs and sauce, or a new technique on the smoker. Barbecue is simple but there sure are a lot of things to consider.